Hello all.  Later this week, I’ll address why I didn’t upload this post about Mothers’ Day at the weekend and instead waited until today.

Anyway, with it being International Women’s Day, it is probably right that this post is about the main women in my life.

I was working at the weekend, and so I arranged a meal on Saturday evening as Sunday was a non-starter.  At the meal were my Mum, Yasmin and Yasmin’s Mum who is…er…Gloria!

I arranged the times and booked the table earlier in the week as I wanted the evening to be as smooth as possible.  Thankfully, it proved that I can get this organisation thing right!

At three minutes past 6 in the evening, or 18:00 by the twenty four hour clock, I signed off from work and took Gloria to the car.  At 18:20, I picked up my Mum and gave her some flowers and a pot plant which she was overwhelmed by.  At 18:50, I collected Yasmin from her flat.  My Google Maps timeline shows that we arrived at the Harvester at 19:29.  We sat straight away as I had pre-booked the table.

As a thank you for booking the table online, I even got one drink free.  That made my large orange juice taste better!

Yasmin enjoyed her usual drink – Rose wine – while Gloria had a coffee and my mother a hot chocolate.  Yasmin was the only one to have more than one drink! 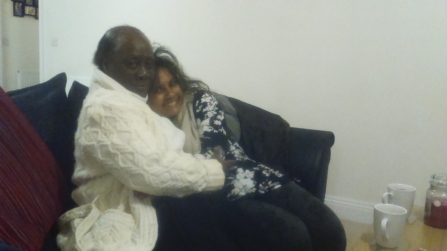 Yasmin had also been eating all day.  This might sound bad that she also wolfed down a starter and main meal but she has been off work with illness and had not been eating for several days.  Before the weekend, she had been living on a diet mainly of cups of tea and glasses of cordial.

We finished up by going back to Yasmin’s flat.  Gloria photo-bombed the photos that she took of Yasmin and I as she was reflected in the mirror above our heads.  I’ve cropped her out of the photo on this upload.

Anyway, that was a great weekend which was rounded off with a couple of great women following me on Twitter.  You may know about Sarah Brown, the wife of the most recent socialist Prime Minister in the UK Gordon Brown.  I’ve highlighted Elena Hagopyan’s profile as you are possibly unfamiliar with her.

Have a great #InternationalWomensDay everyone.

Remember, guys, even just changing the way that you and your friends speak about women behind their backs makes a great difference to equality.  Before you make a crude comment about a woman that you know, ask yourself if that’s how you would like people to speak about your mother/ neice/ daughter/ girlfriend/ wife.